Bonjour from a very hot Paris!

It is an act of courage just to walk around today in Paris so I’m afraid that today’s blog will not be one of our most interesting.  We feel for those who work outside: the contruction workers right down the street who are taking down scaffolding; the taxi drivers in unairconditioned cars; the  same man who stands hour after hour in a tiny kiosk in our neighborhood selling rotisserie chickens to passersby.  We’ve bought from him many times.  And most especially, we feel badly for folks who have only four or five days in Paris and so excited to see all the sights.  I can’t imagine standing in line for two hours to see the Eiffel Tower in this heat!

We went out early this morning to visit our area market which has always been on Wednesday mornings.  They were not set up so perhaps the heat was a factor.  It would be very hard to keep anything cool, and they do sell meats, cheeses and seafood.  It was from this market that we bought the infamous shrimp in July several years ago which made me so deathly sick.

On the way back from that disappointing jaunt, we stopped into a very historic building called L’Hotel Beauvais on rue Francois Miron.  In French the word hotel doesn’t always carry the modern day meaning.  It can mean the former residence of a wealthy family held in high regard from centuries ago.  L’Hotel Beauvais is one of these.  It’s a functional government building but they do allow a quick walkthrough if you can produce a picture ID.  The few pictures we have don’t do this lovely structure justice.  Bernie took a shot of the history summary which I hope you can read.  Remember just click on the photograph and it will enlarge.  Take note that Mozart once stayed in this house or maison. 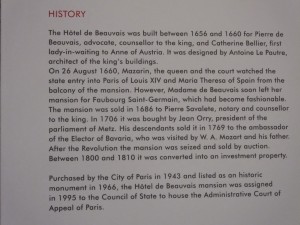 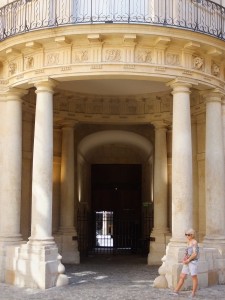 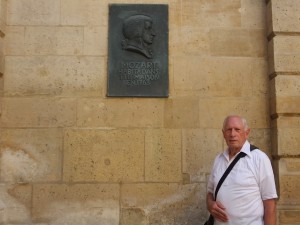 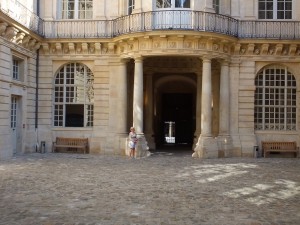 Before I sign off for today, let me mention that we had dinner last evening with Richard Nahem, our friend of several years now in Paris. He is a native New Yorker turned tour guide here in Paris and has the EYE PREFER PARIS blog which some of you subscribe to.  We ate at a new place for us near the Bastille called Auberge Flora.  It was quite tasty and was airconditioned!  Richard told us that all the movie theatres would be free to the public today because of the heat.  I bet they were jammed. On our walk back, we caught a beautiful shot of the statue at La Place de la Bastille.

We’re in search of an air-conditioned restaurant for dinner so let me get busy on Google.  It is a sauna in the apartment.  Hopefully, tomorrow’s blog will not be compromised by this heat!