Today I will make you laugh out loud because it’s pretty chilly in Paris!  After the scorching time we’ve had in the apartment, this morning all of our windows are closed up tight. The wind howled last night so much that it blew wide open a slightly cracked large, heavy window in the kitchen! The wind will be 17 mph until early afternoon and the temps will be only in the upper 60’s/low 70’s.

Today will be a jeans day for me – first time this trip!  As to all of yesterday’s adventures, they went from underwhelming to very interesting.

Peggy and I attended the weekly Friday afternoon fashion show at Les Galleries Lafayette.  I had told Peggy to prepare to be slightly underwhelmed, and she totally embraced that response.  Bernie and I did the show about five years ago and had the same reaction.  As chic and beautiful as this large department store is, their fashion show could stand a significant upgrade! It’s very hard to find the room to be begin with, and then it is unimpressive when you finally do.  The oddity of the whole affair was that early arrivals were given the worst seats (ours), and last minute folks got front row! We could barely see anything (certainly not the shoes) and the show only lasted 25 minutes. No photos allowed but Peggy sneaked a couple with her iPhone.  Not the best but it will give you the idea. 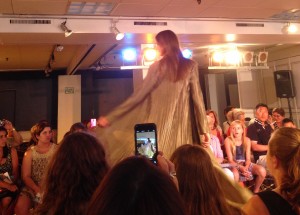 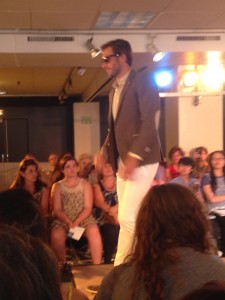 The fashion show reflected what is happening in Paris in regard to fashion:  it isn’t nearly as stunning as it once was. When we first started coming to Paris eleven years ago, the streets were a constant stream of exquisite fashion. Now, it’s the same casual bunch of rags, flip-flops, short shorts, tatoos, tattered jeans and all manner of bra straps showing.  Sorry to sound cynical, but I miss the former beautiful style! And now with the demise of their beautiful scarves, I am truly devastated…ha!  The show yesterday had not one scarf, almost no jewelry and tennis shoes with most of the outfits.  So I think I’m getting old!

Last night after dinner at one of our favorite little spots, Le Bourguignon du Marais, 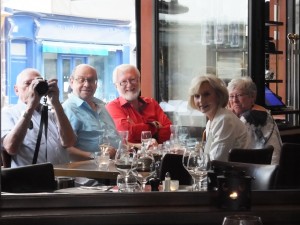 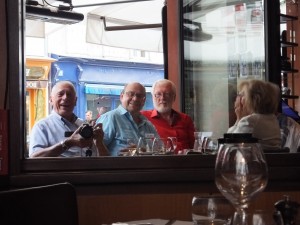 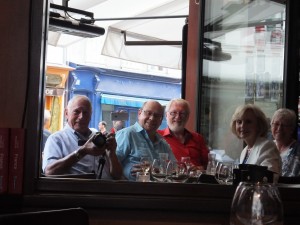 we attended a little jazz concert with Jim and Peggy.  A friend of theirs from Alabama was playing. Very eclectic atmostphere and most entertaining. Kind of like our Coffee Klatch used to be! No pics from the concert as folks are ill at ease in Paris with personal picture taking.  Also, something new this year!  Tis a changing world.

We got home about midnight and this lady slept in until 9:45!