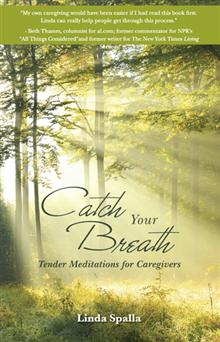 42: A taping session (An excerpt from Catch Your Breath)

“Speech is the voice of the heart.”
Anna Quindlen

Toward the end of mother’s stay at my house, I had an idea. I wanted mother to make an audio tape for each of my children. My motivation was selfish. My Dad died much too early when he was only 72, and I can hardly remember the sound of his voice. I yearn to hear it one more time. I wanted to preserve mother’s voice for my children so they would never forget it.

I worked with mother for days writing down memories of times together with my kids…births, holidays, summer vacations, trips together, even times when they were little snits! We worked on this for days because she would get tired; and we’d lay it aside and start again on another day.

I typed it all out for her and had her practice without me in the room as she just talked through each episode. Her voice was shaky and weak, but she finally got excited about doing this as long as we took our time.

Then the big day came where we tried the first recording on a small tape recorder that she had actually given me. Technology has really changed! We used those tiny little cassette tapes in a recorder that was probably 3×4; it was easy for her to hold. I reassured her that there was no reason to stress as we could erase and re-record as many times as needed until it was exactly how she wanted it.

This became a loving project and gave her something to look forward to for about three weeks. I’m so glad we did it. I gave both my son and my daughter their personalized version set to the tone of their lives. I hope they still have the tapes and listen to them occasionally. I’m afraid to ask them.

This might be a great project for you depending on the strength and attitude of your loved one.
And by the way, make a copy for yourself. I didn’t think to do that and I’m so sorry now!

“Catch Your Breath…Tender Meditations for Caregivers” is due out in early 2015 from Balboa Press.

1: A dose of overconfidence
2: Rearranging space and finding some for you
3: A bumpy mattress and street noise
4: An army and dirty carpets
5: The crystal bell
6: A cup of hot chocolate
7: It’s all about the bathroom
8: Gray days
9: Resentment and feeling trapped
10: Next comes the guilt

In the throes of day-to-day

44: Giving up and moving to assisted living
45: Smaller spaces
46: Learning to trust all over again
47: The importance of a vacuum cleaner
48: The fall
49: Sunday afternoons
50: Continue with celebrations

The end and the beginning

Final Word: Tie a knot and hang on