Along the Breathtaking Rhine River Gorge 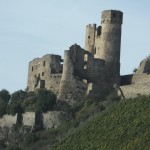 The peak of our Rhine River cruise was today’s anticipation of the famous Rhine River Gorge. (It’s the television commercial we all see from Viking Cruise Lines)   To experience this in ideal fashion, the weather should be warm, clear, blue skies and no wind. We waked up to freezing cold temps where you could see your breath, total fog and of course disappointment. All bundled like snow skiers, we headed out at 9:30.  Some in our group had scheduled a gondola ride across the little town of Rudesheim, the most visited city in Germany known for its wines and vineyards where we were docked. Our tour was to a famous musical instument museum which was unexpectedly charming.  Some went to drink coffee, others to drink wine and some on the gondola ride!  Too bad–they saw nothing but fog!

The museum was full of a private collection of antique musical instruments housed in a medival home.  The two most unusual pieces were a player piano that also played six violins at the same time, all from a paper roller.  These instruments were made from 1902 to 1930 and cost the same as a small house at the time.  3500 were produced and only 60 are still in existence.  Amazing to listen to and watch the violins being plucked mechanically.  Sophia Burwell wondered how in the world they tuned the violins!  (She played viola in the Huntsville orchestra for 34 years.)  The other distinctively interesting instrument was an animal automaton from the same time period.

The little town of Rudesheim was lovely, even with the cold and the fog.

We returned to the river boat by 1pm for lunch and then voila! out came the sun, warmer temps and disappearing fog.  Our afternoon along the Rhine River Gorge was fabulous, viewing a total of thirty castles, many of which were destroyed over the years by (you guessed it, the French) and rebuilt.  One of the most interesting aspects were the tunnels built like castles by Hitler to keep them from being bombed during WWII.  The big surprise for me was the lack of color during the autumn season.  Just like in Paris, only a tinge of yellow.  There are no maple trees in Germany either!

We’ll let the pictures tell the rest of the story and hope you enjoy.  I have decreased the size because there are so many.  It was a 3-hour journey through the gorge, and we did finally OD on castles.  Tonight we are docked in Koblantz.

Caregiving Can Be an Act of Waiting Cologne, Germany