The streets were already less crowded in Paris; the lack of tourists noticeable. Now with the arrival of August in a few days, the streets are even more subdued. All of Europe takes “holiday” or “vacances” during the month of August, but according to a local friend, France is “the worst” about doing this. It is hard to find anyone to work during this period. We chatted with friends, Jerome and Elena last night about all of this, and it was so interesting to hear them talk about how eerie it was during lockdown to see the always bustling streets of Paris completely empty. We are having dinner together tonight at a favorite local café called Chez Janou. Bernie can’t wait for the rabbit as they have the best!

We did attend the organ concert at St. Eustache on Sunday afternoon and enjoyed it; however, the church is so voluminous and so tall that the acoustics bounced around almost to the point of distortion. The organist was quite young and excellent. He played a symphony for organ by Brahams. No photos allowed but I did sneak one in an effort to get his red socks! 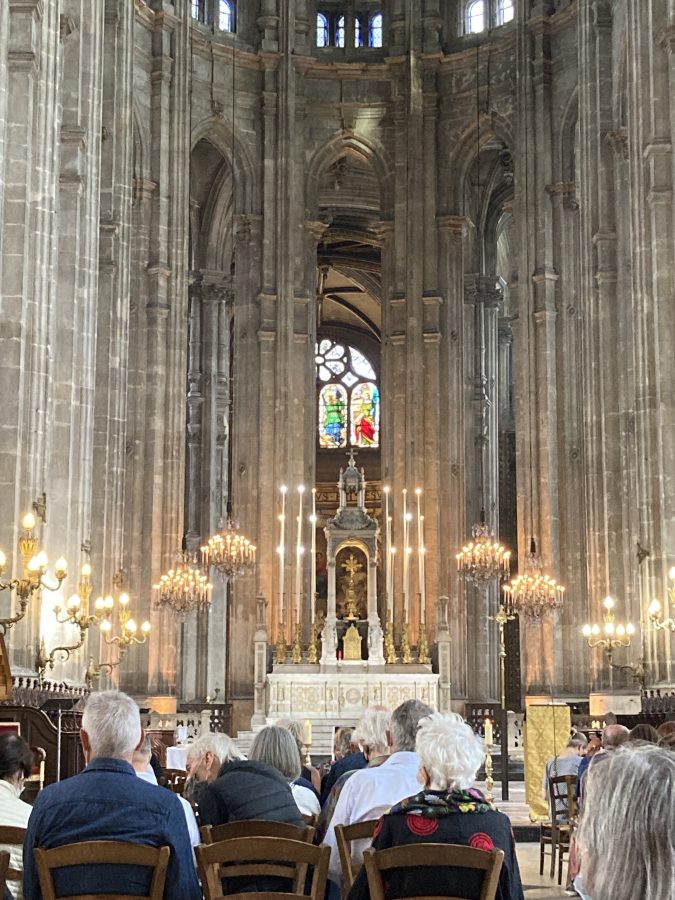 Yesterday (Monday) was a day of reconnection with friends we have made over the years. Our friend Hannah is German but now an American citizen who had lived in California for many years but moved to Oregon last year to escape California’s high cost of living and deteriorating quality of life. Hannah comes to Paris four times a year and loves everything about it. We met at the very beautiful brasserie inside Au Printemps, the other large department store in Paris. It is stunning with a stained glass dome, usually hopping with activity but almost empty yesterday.

Here’s a look at some of the current fashion inside Printemps including beautiful wedding gowns.

Bernie wanted to finish up the afternoon on the Champs Elysées to see the start of a Christo & Jeanne-Claude project, an artist couple whose story is very interesting. They were born on the same day; he, in Bulgaria and she, in Morocco. They were inseparable until Christo’s death and always made sure that their art works in progress were to be continued after their deaths. Thus the wrapping of the L’Arc de Triomphe.

Christa was always the artist and Jeanne-Claude was the project manager. He created large sketches which would later be used to make gigantic installations and wrappings. They never flew together and never accepted any sponsors. Their works were ephemeral lasting only 14 days. They compared their art to rainbows: beautiful yet elusive and volatile. No one could ever buy or own anything they created.

The work on the L’Arc is just beginning. We will take photos as it progresses.

Our final encounter was to say “Bonjour” to the former proprietor of Le Bouquet St. Paul (below us) whose name is Benjamin. He was there for three years, and he and Bernie became great friends.

Sorry, no doors or lovers today, and rain may dampen any expectation for either today. We are saddened to see the rise of COVID cases in Alabama! The start of a new process related to COVID in Paris has been delayed until August 6 where we must show our vaccine pass before entry to any inside venue. And of course, masks on!