A Cold Wake-Up Call for Bernie!!

Yesterday began badly for Bernie as he found himself taking a cold shower! It’s quite chilly in the mornings as we have only three electric wall units for heat which are limited in feeding heat into all areas of the apartment. Our friend Jerome, the maintenance manager at the Monoprix, is coming at noon to assess the situation and hopefully get it fixed. The good news is that we have hot water elsewhere in the apartment.

Many of you have asked about Thanksgiving, turkeys, etc. Remember that France had no Indians or Pilgrims or Plymouth Rock. Thanksgiving is purely American though the really surprising thing for us is that Black Friday is huge in Paris. Preparations are underway for the biggest retail day of the year, just like in America, the day after Thanksgiving. Yes, there are turkeys in Paris but a traditional meal like we have in America is rare. I know our friend, Richard Nahem, adheres to the American tradition. We will spend the day thinking about family as they travel to Atlanta and Florida to be with other family on all sides. It’s strange but we will adjust. Certainly, Bernie and I have grateful hearts for good health, the happiness we share, and our families as they grow and prosper. I will miss my little peeps…Andrew, Avery, Carson and James, the most.

I slept until almost 9am yesterday (!) so we were off to a slow, easy start. Both of our outings in search of lights were disappointing. First we went to Bercy Village, an interesting outdoor shopping experience in the 12th arrondissement. This area dates back to the late 1700’s and Henry XIV who allowed the area to produce wine without taxing it. It became the largest wine storage area IN THE WORLD. The shops and restaurants are housed in the original stone warehouses. We have been here several times before, but found yesterday that cafés, bars, and restaurants have almost taken over, many fewer shops than before. The lights were “contemporary.” 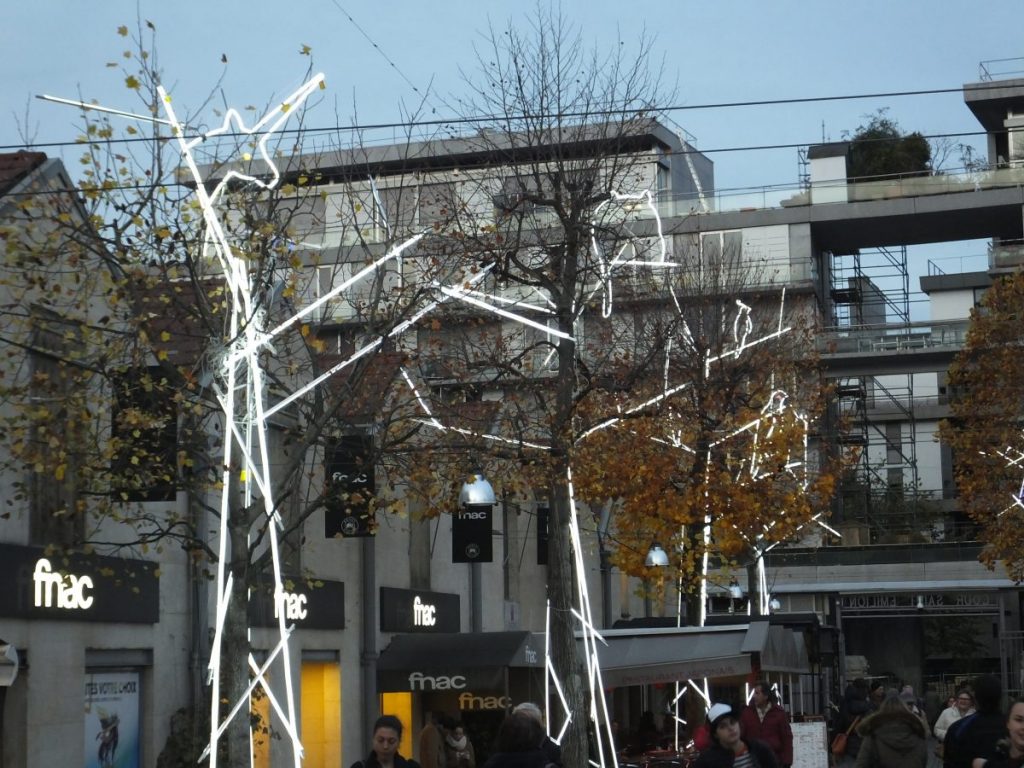 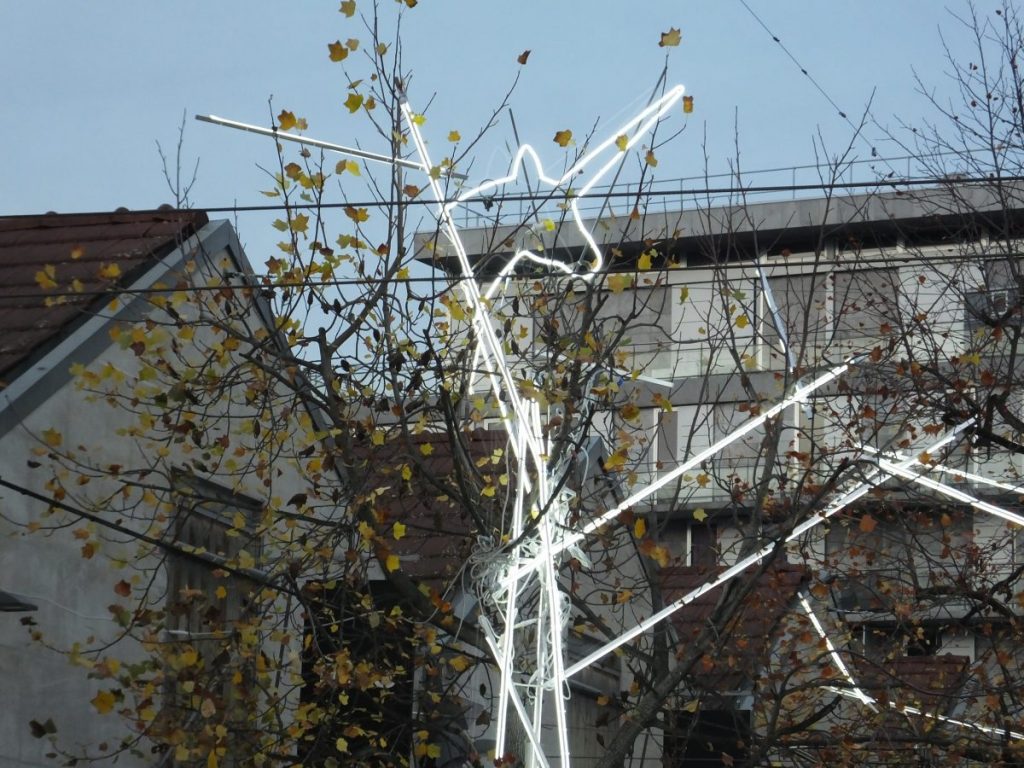 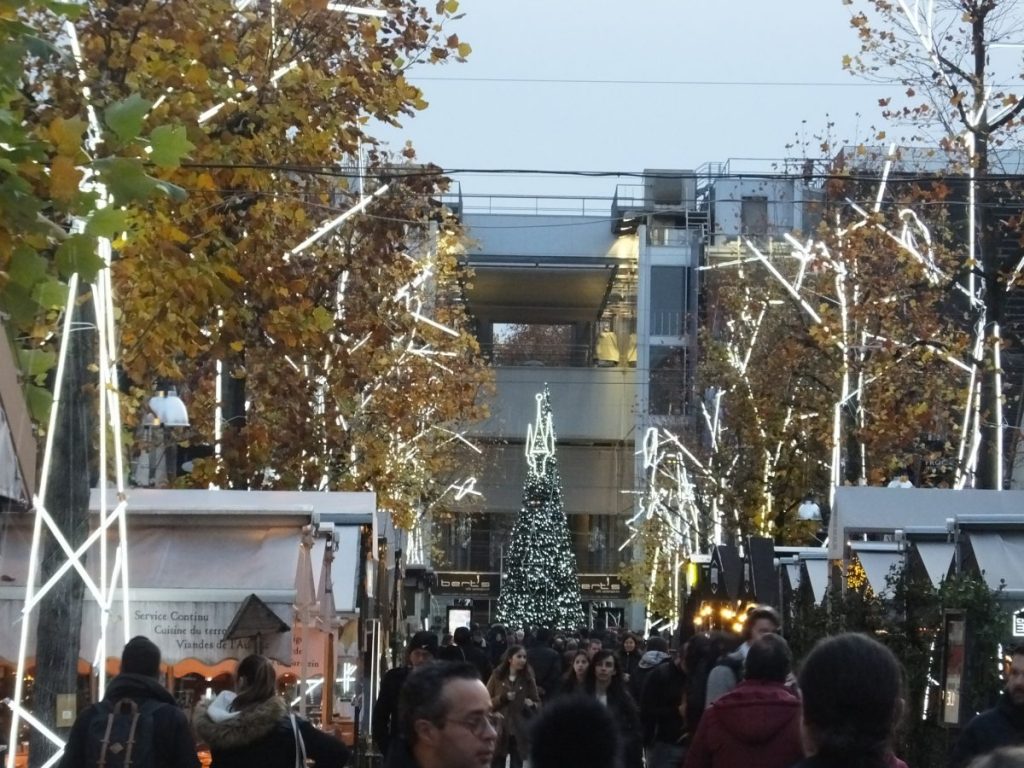 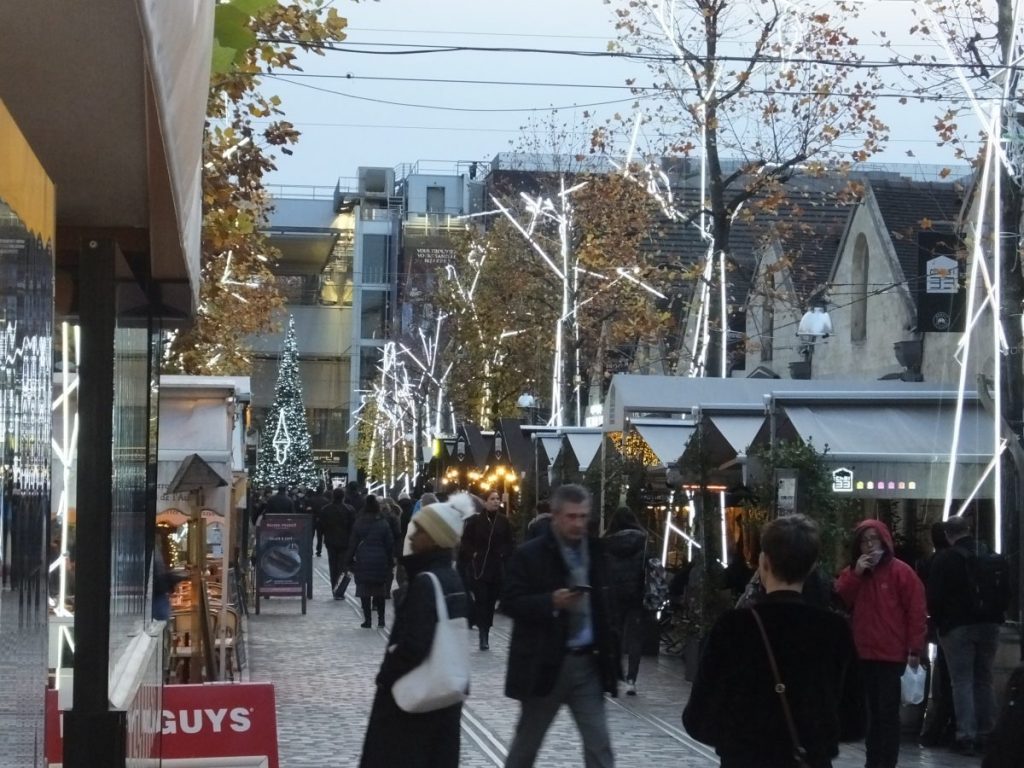 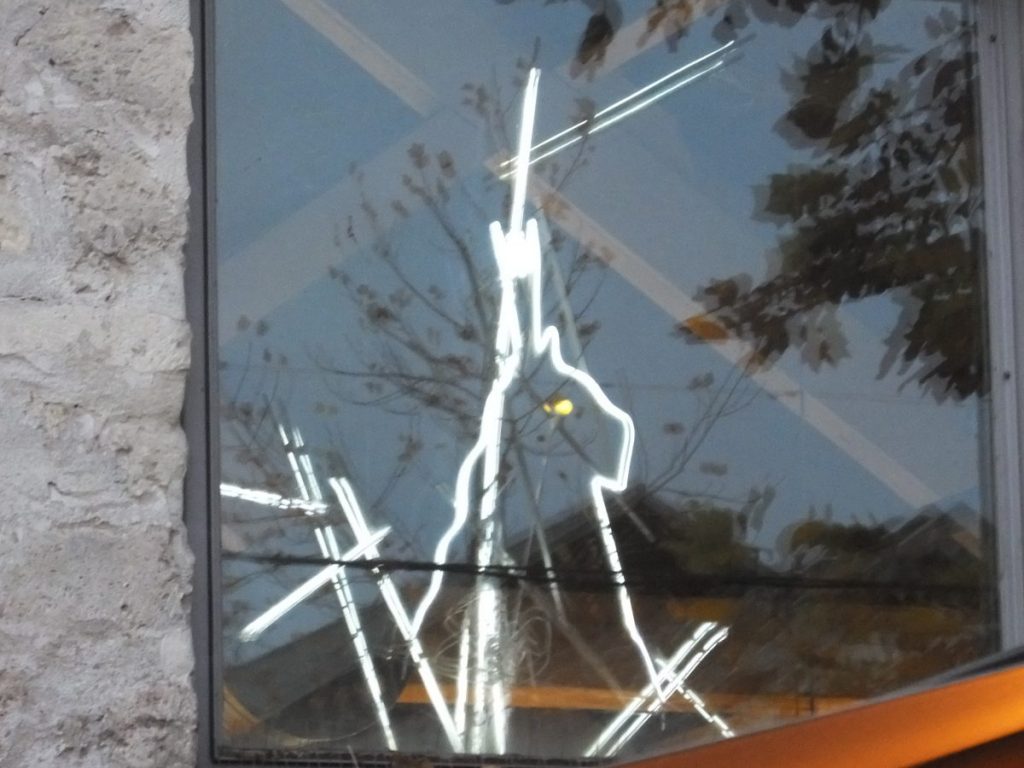 This is actually a reflection that Bernie caught in a window and is our best light photo of the day. 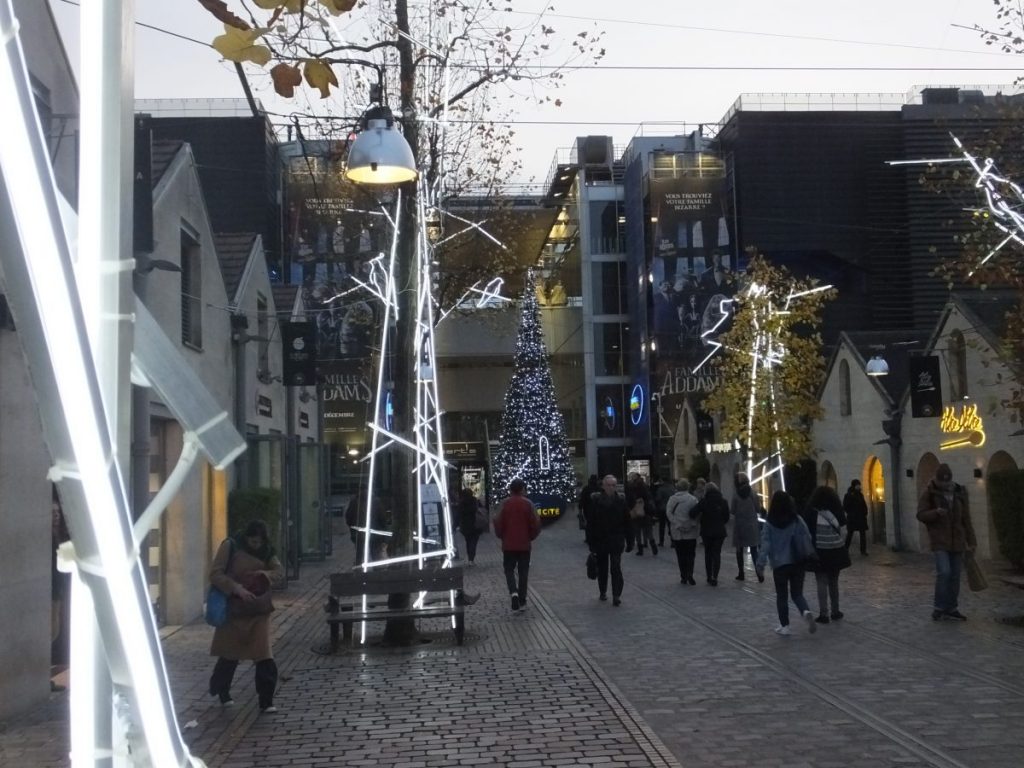 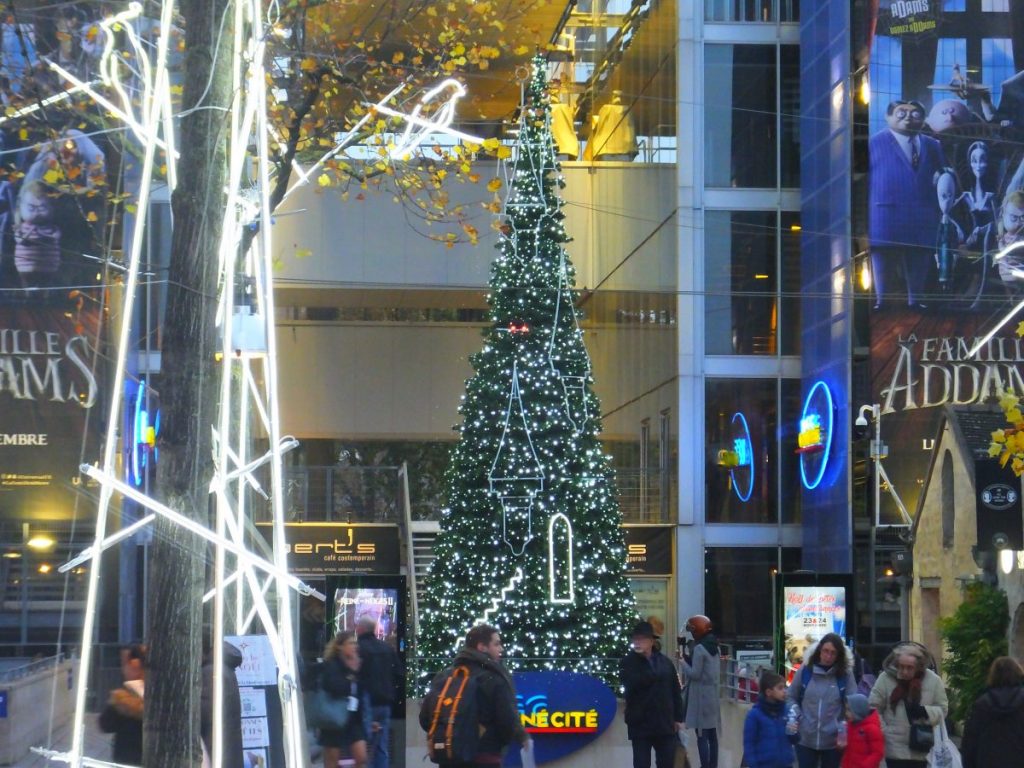 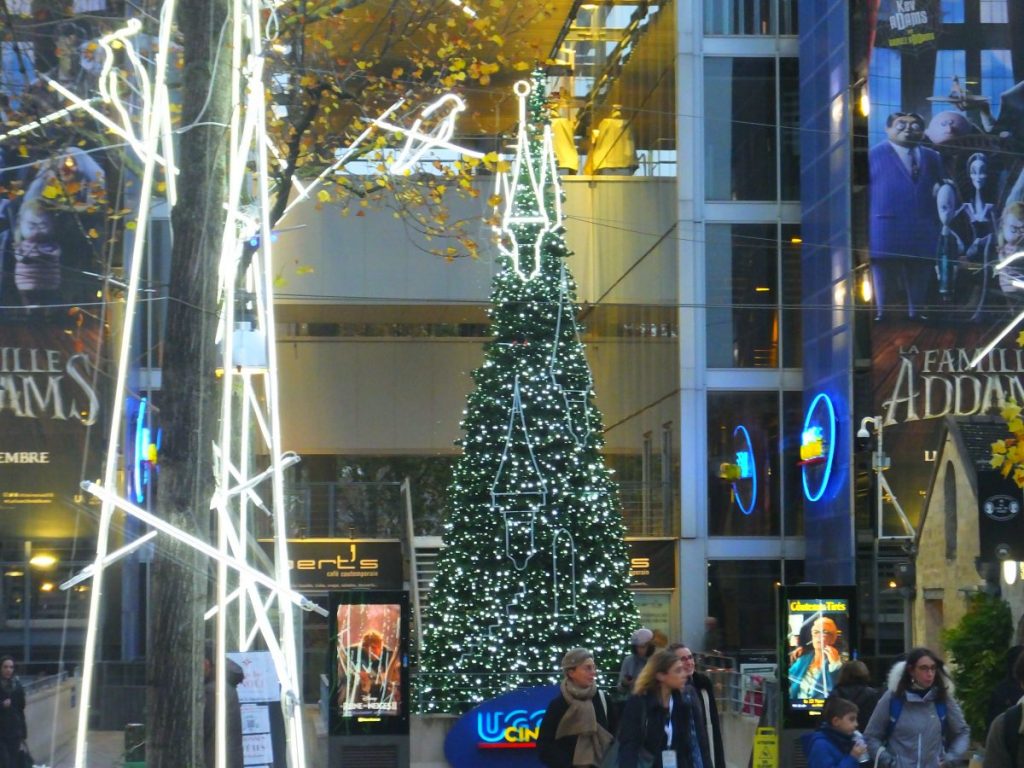 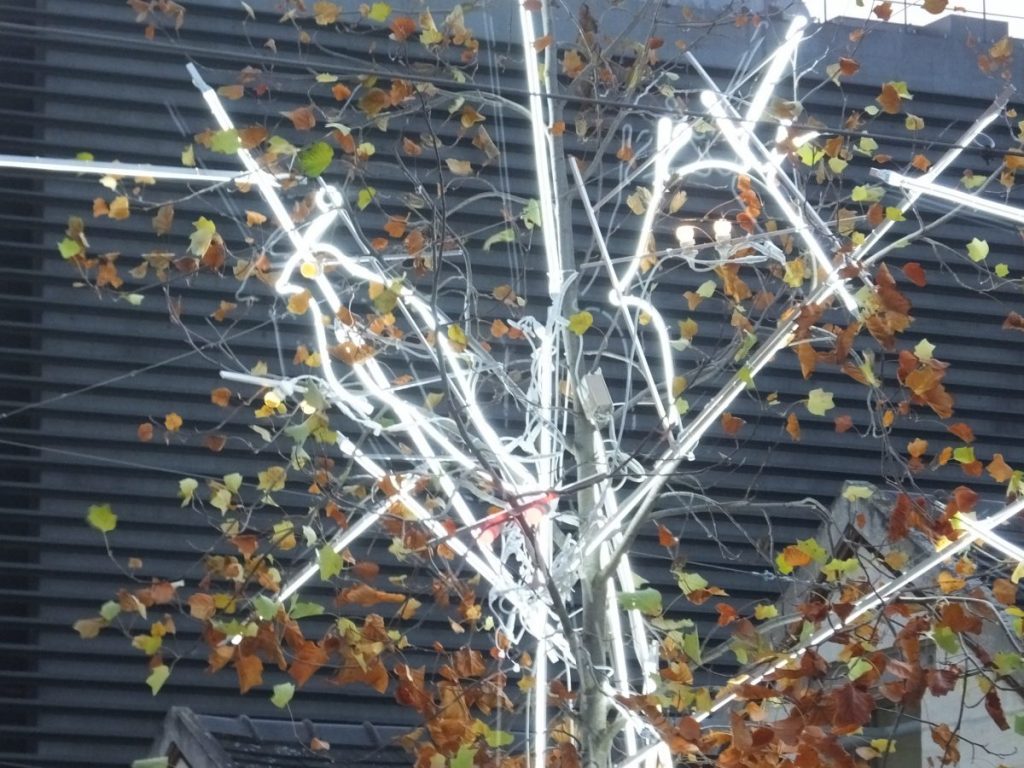 There really wasn’t a lot to see, but we checked it off our list. Then since we were close, we went to Le Viaduct des Arts which was supposed to have a light display on the train viaducts but, alas, did not! We walked all the way home from Gare de Lyon to rue St. Paul in the crisp air. Every day is not a home-run!

Wish us good luck in getting Bernie’s shower back on track.