Bernie and I are visiting with good friends in Wichita, Kansas, Bernie’s home for many years. After relocating from Paris to the States, his family finally made Wichita their permanent home. Bernie is retracing old memories and discovering that most of those have been replaced with all things new. But the new can’t replace the great stories of youth.

So what’s interesting about this is always between the lines, oui?

On Monday, we broke up the long drive from Huntsville by stopping in Springfield, Missouri overnight, and in good fashion left at 8 o’clock yesterday morning on schedule. First was a stop to add a quart of oil to the Vette which delayed us a bit. Then we found the old Route 66 signs which were going to lead us to a quick jaunt through Galena, Kansas to resurrect memories from our Route 66 trip about 10 years ago. Galena was my favorite stop along the route. So we were enthralled with all the signs confirming our route and ready for the day. (The Galena stop was Bernie’s big surprise for me or it was going to be.) 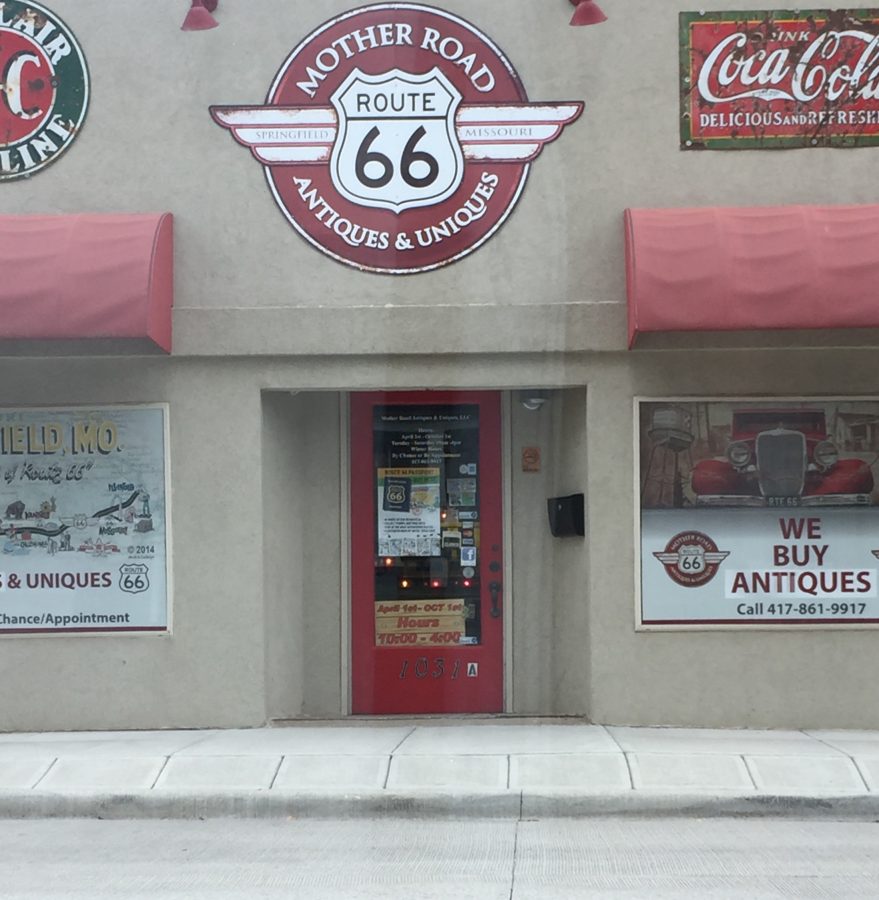 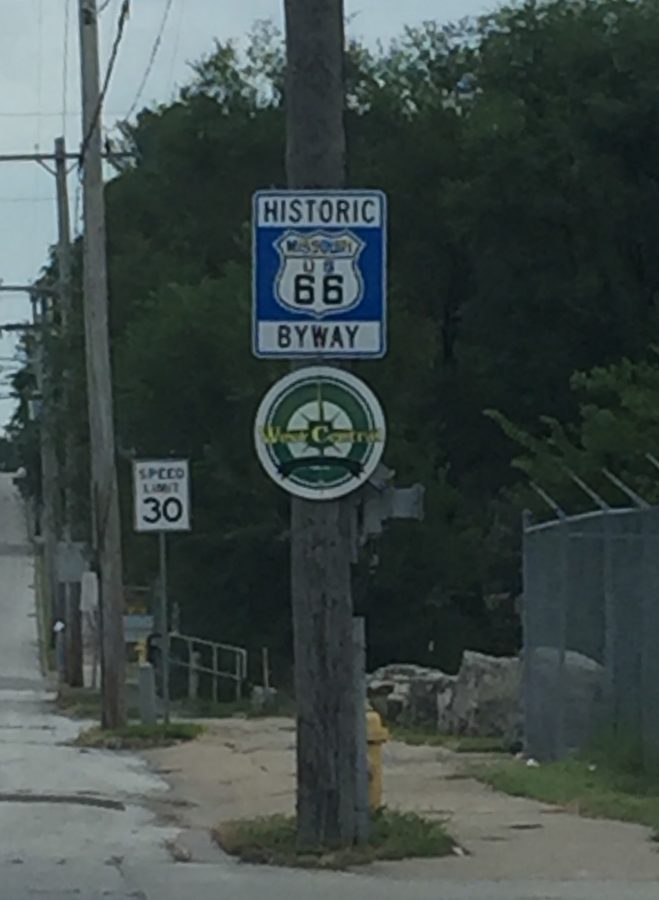 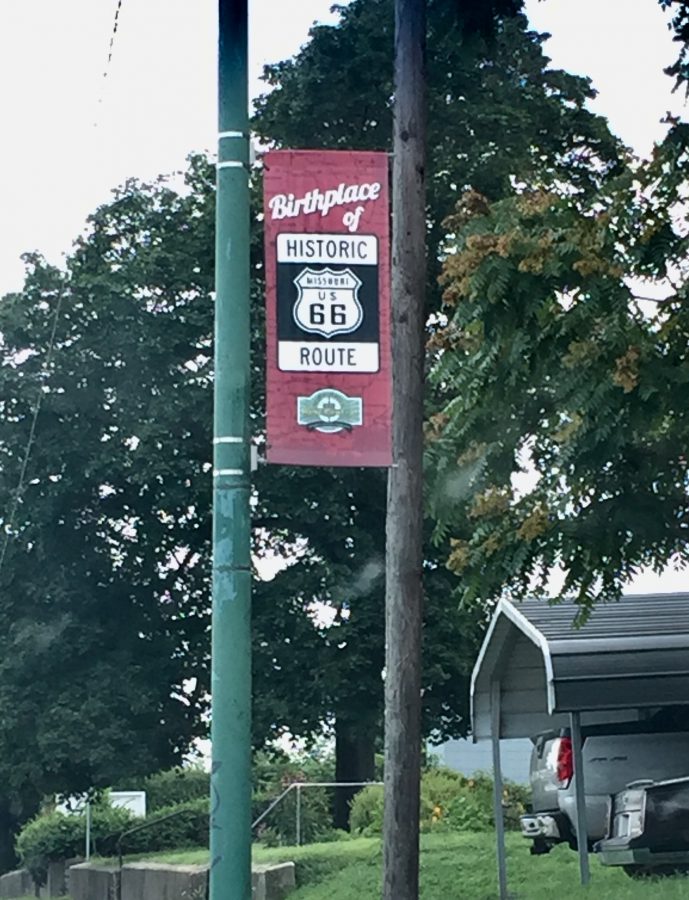 As we’re driving along, I’m commenting how I don’t remember any of this, and how lovely and peaceful it is to be on a road with no traffic, no billboards, no storefronts, truly idyllic. We go and go and go, and Bernie is stating frequently to me that Joplin, Missouri is “just around the corner” and then Galena. We go and go and go for over an hour and see a Phillips 66 station coming around the bend next to Interstate 44. (If you don’t know the old Route 66 history, it generally parallels the interstates or better said, they parallel it.) Anyway, as we’re pulling up to the gas station, Bernie says in his usual calm manner, “I think we may be going in the wrong direction! The sun should be on the other side.” Of course, I respond in my usual restrained manner, “What??!!! What do you mean we’re going in the wrong direction…all this time? We’re supposed to meet our friends at noon in Wichita!”

Bernie goes inside to ask and sure enough, we are on the way to St. Louis which is EAST, not WEST. So, we look at each other and decide to laugh, chill out, and see just how fast this Vette can go. We take off in the direction of WEST to retrace the last hour which of course is shorter by Interstate than on the old route. So, here’s the image you should remember: we left our Holiday Inn Express at eight o’clock; two hours and nine minutes later, we’re passing it again!!

We had under two hours to get to Wichita.

So the texting began, giving our waiting friends who live in Topeka and were already in Wichita, the minute-by-minute update of our mistake. We flew, sometimes going 90 mph which is not at all how Bernie usually drives. I’m constantly asking questions, “How far is this? How long will it take to get to….” You can imagine but I’m proud to say that we kept it light and no one blamed anyone else. We came to the conclusion that we were both so engrossed with the Old Route 66 signs that neither of us paid any attention to “direction.” So we never saw Joplin, never saw Galena, whizzed past those exits on I-44.

Finally, Bernie says, “Okay, we’re looking for Highway 400 West which will take us right into Wichita to our hotel.” We find it and it’s a two-lane truck route, heavy with traffic! We’re zipping down the road , up a slight hill and wham, Bernie slams on the breaks as we see a mile-long line of traffic which has come to a dead stop….in the middle of nowhere. We’re in Kansas by now and the middle of nowhere is the middle of nowhere!! Then we see cars making u-turns, and big sprays of white dust from some turning onto a dirt road. We edge our way up the row of traffic to the dirt road, and as I live and breathe, Bernie makes the turn, with the comment that he’s following cars with Kansas license plates. Off we go in this newly spit-shined Vette on a dirt road to nowhere.  If you can imagine, we try to follow the dust since we haven’t the slightest clue which way to go. All of a sudden through the dust is an approaching vehicle, which we manage to avoid. Then we come to another intersection and decide once again to follow the dust, then another sudden stop of cars lined up because this road is also closed. We all make a u-turn and follow the lead car with the KS license plate. Finally, we come to paved road (!) and then realize we are at 400 WEST which is our route to Wichita. The candy apple red Vette is pretty much a light gray by now.

We have texted our friends that they should go ahead and eat lunch without us, and that Bernie’s new ETA is 2:30!! Then we start thinking about our own lunch and decide not to waste any time stopping somewhere (which was a funny thought because there’s NOWHERE to stop). We run in for a bathroom break at a gas station and buy our lunch which for me was cheese and crackers and a granola bar and for Bernie a little baguette ham sandwich probably made last week.  We learn that the dilemma with the road blockage was due to an attempt to move a house which had gone significantly awry! (Belinda Kennedy) Anyway, it made for more more laughs, some more flying (literally) down the road, and by Jove, we pulled into our hotel at 2:33!

This last photo is a picture of the first Pizza Hut building on the campus of Wichita State University. The Carney brothers began the chain in 1957, and this is a shrine and a museum telling their story.

Always an adventure for us whether Paris or Kansas!!

Speaking of Paris, this is a good place to tease our upcoming blogs starting in mid-September. Hope you join us! 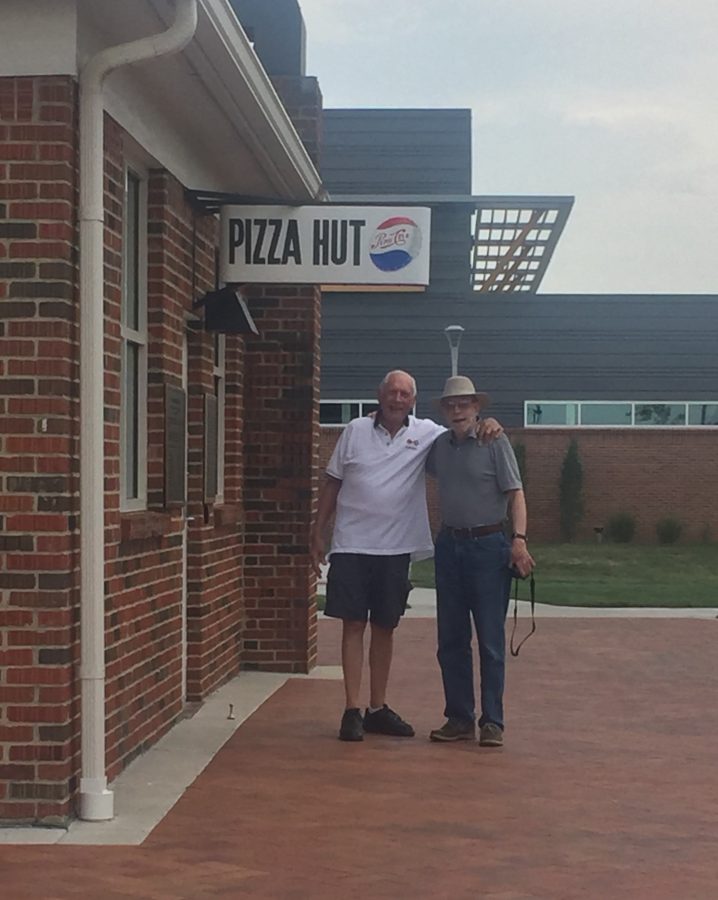 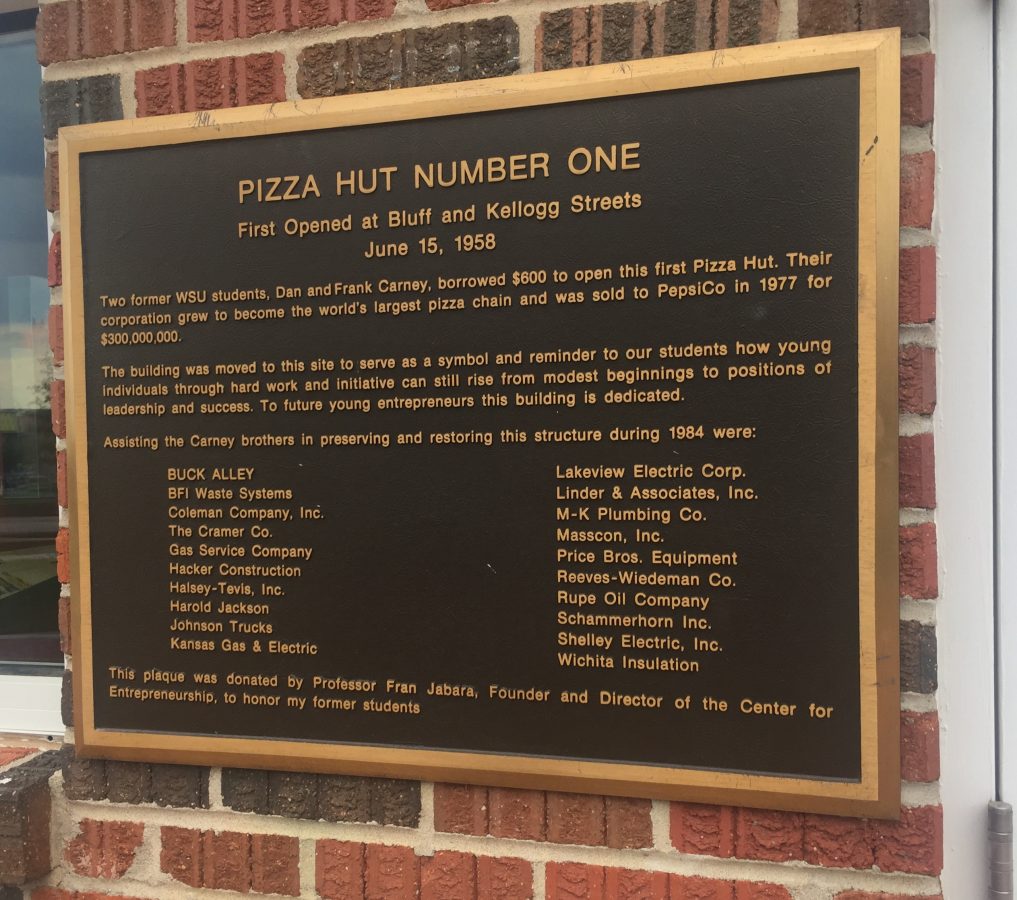 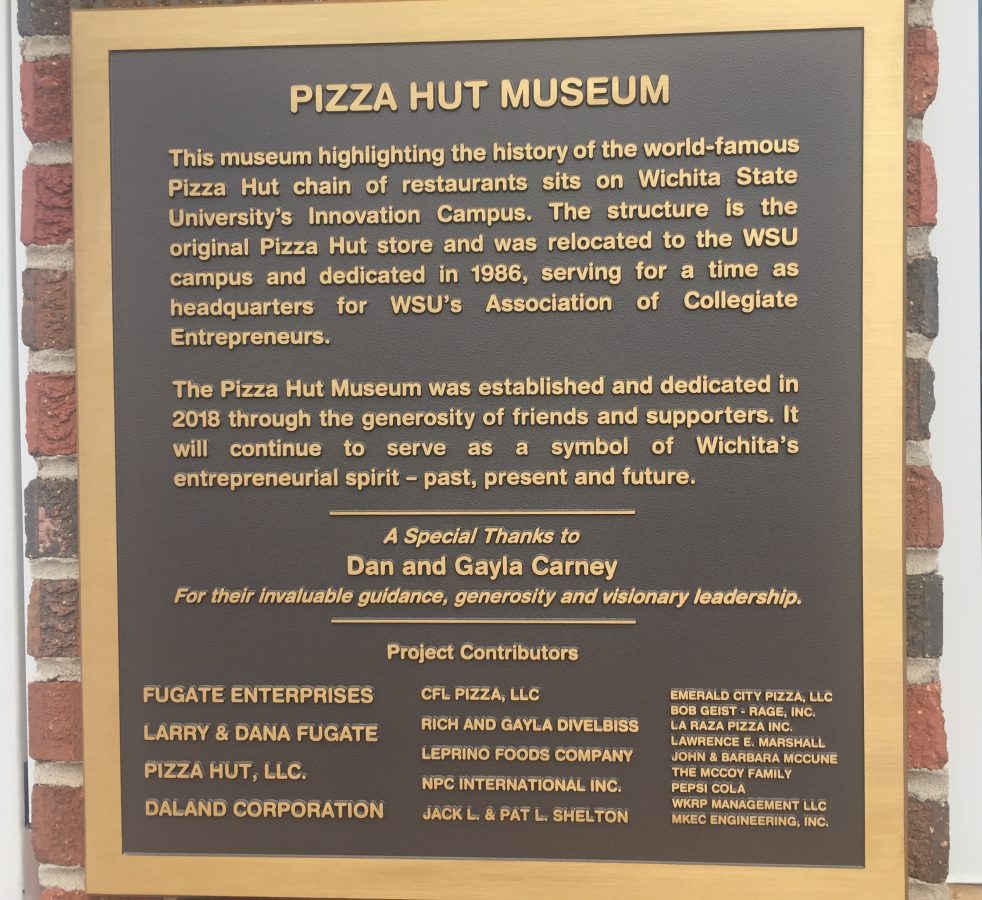 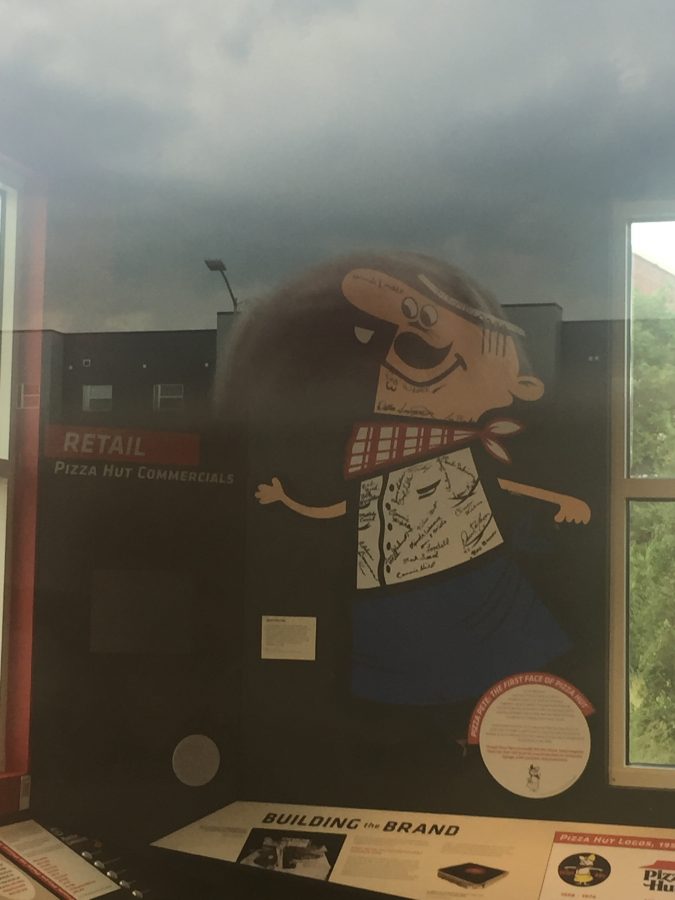 Original art work from the first establishment (shot through the window)