A closer look at Precious Notre Dame After the Fire

We wish for you in Alabama and other ridiculously hot places to have Paris weather. At 3pm yesterday afternoon, it was 65 or so, with enough breeze to feel chilly in the shade.

It was a gorgeous and productive day for us which started early with a thorough vacuuming of our apartment, doing things which I’m sure no other renter does, like baseboards, wet-mopping the floor, etc. There is no dust like black Paris dust which creeps in from the pollution-filled air almost overnight. Vacuuming and filling the ice trays have always been Bernie’s two jobs and he does both willingly and well!

We also had coffee with our friend Richard Nahem to get caught up, tried unsuccessfully to find our cable company to help with a television that’s not working, tried a new spot called Le Regalade for lunch which was only mediocre, and managed to get Bernie’s birthday  celebration set at Les Hombres on the evening of November 15th. After weeks of trying to book it on-line, we showed up in person and voila, took care of everything.

Our trek to Les Hombres took us to Pont Alma where the Diana memorial is located. She was killed in the tunnel immediately beneath the Flame of Liberty. 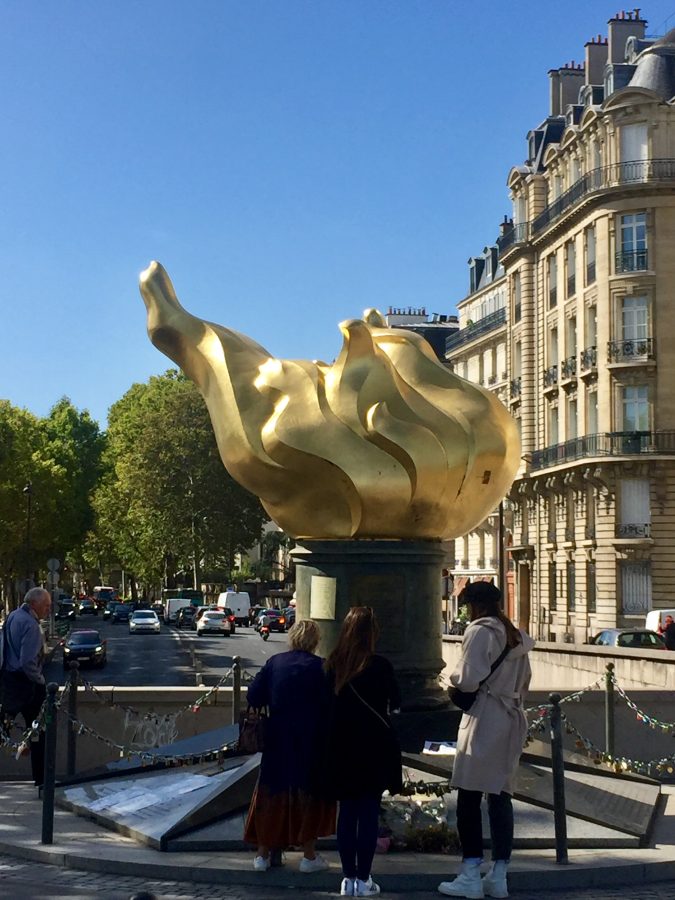 It was such a beautiful day for strolling so we decided to do a deep dive in the area around Notre Dame. We got as close as we could all the way around. Bernie’s sophisticated camera captured an amazing view of the injured lady. I’ll let the pictures tell the story. So sad…Bernie broke down in tears when he realized that he may never see the finished renovation, now predicted to be ten years.

We thought the exterior would be blacker which begs the question as to whether some of the outside has already been cleaned. The fragility of the structure makes me think otherwise but we’ll try to find out.

Our Light photos of the day are pretty lovely. Everyone seems to be enjoying them, and it’s a fun challenge to see the world with a slightly different eye.

Happy day to all!

P.S. If you’re coming to Paris and looking for a place to stay, we were introduced to a new hotel in our area by Richard called the JOBO which stands for Josephine Bonaparte! It’s adorable but oh so pricey! Almost 500 euros per night. It’s right off St. Catherine’s Square.