The picture says it all…the infamous passport has arrived. Many thanks for your prayers and well wishes. I’m quite sure they helped to bring a smile to Emily’s face. Merci beaucoup!

I’m not quite sure why we have gotten so lucky with the weather here in mid-July, but it has been near perfect. We’ve spent as much time as possible outside just roaming around and enjoying it.

We left for the Champs Elysées just before lunch to eat at the Café George Cinq where a friend named Benjamin works. He was the proprietor of Le Bouquet St. Paul for about 3 years, and we became good friends. Alas, he was off yesterday so we’ll return another day, but while we were there we enjoyed the quieter ambiance and a long stroll. Check out the sparsely populated sidewalks. 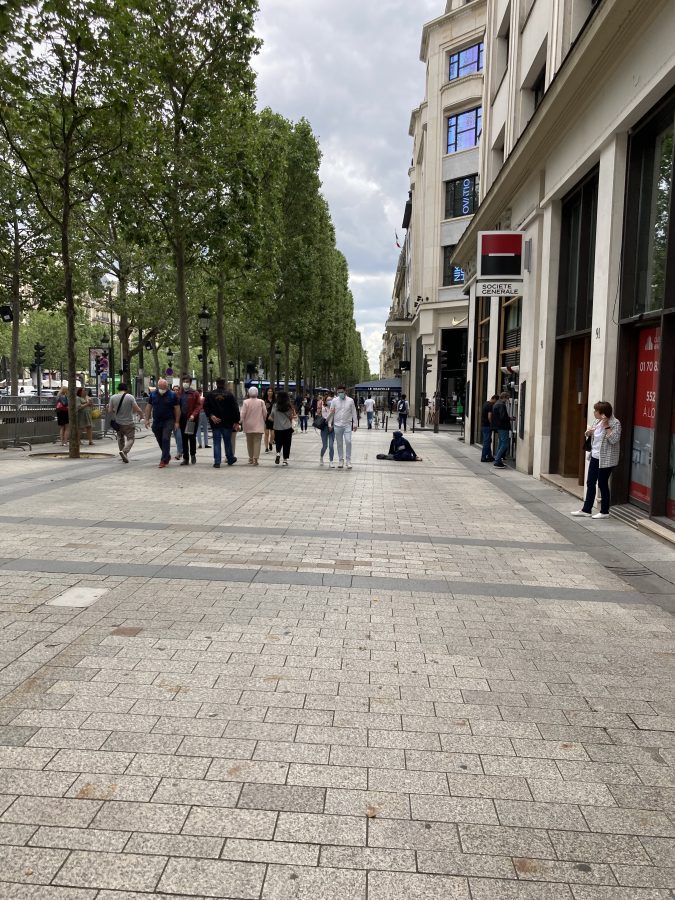 In Paris, when a building is under renovation, it is covered with a beautiful facade to hide the construction. One entire block yesterday was covered with a promotional facade for Dior which I’m sure cost thousands of euros. It was amazing and even had some three-dimensional qualities. I naively thought it was a new Dior store and asked our waiter if we could go inside. (Ha!) He smiled politely and said, “Non.”  That’s when we realized that it was a trompe l’oeil, a trick of the eye!

We captured some beautiful doors which we’ve passed a hundred times without really noticing. It’s so amazing what focus can deliver.

I was disappointed to find that the beautiful flower beds which have always marked the Franklin Roosevelt intersection appear to have been replaced with these very contemporary water fountains. Not a fan.

We walked all the way down the Champs toward La Place de la Concorde where they are setting up for the big parade on the 14th of July. The president’s palace is very nearby and we believe this was his entourage.

I spent time on the internet and discovered there is a plethora of information about the doors of Paris. I would not have selected this topic because my friend Richard Nahem (Eye Prefer Paris) posts about doors a lot. I didn’t want to rain on his parade, so to speak; however, since so many of you voted for it, I stayed true to your wishes.

One of the very famous doors of Paris is actually on St. Antoine, our busy street. It is l’Ecole Francs Bourgeois, a school with over 2000 students, both elementary and high. For those who love history, here’s a recap from Wikipedia:

These last two photos above are the doors to the non—denominational church just past the school. I love the figures of people that adorn so many of the doors, and I always wonder who those people were! Here’s another example.

Our stroll led us up to La Place de la Bastille past a very famous restaurant which appears now to be closed. How sad! It dates from 1864 and was the best Alsatian food in Paris. Oops, just checked the website and it says they are “temporarily closed.” We’ll  see.

On Beaumarchais which means beautiful thoroughfare I probably photographed 25 doors which I won’t unload on you all at one time. Here’s a few which were spectacular. If I’m sending too many, let me know.

The lovers of the day were chosen by Bernie, such a cute idea!

And finally, how about a “swinging” good dinner. Never know what you’ll find in Paris!

An Easy, Cool Day in Paris Discovering a Different Paris