Steps and More Steps: A Saturday at Montmartre

Yesterday was a journey of steps, steps and more steps. And Bernie and I are discovering the difference in young legs and old legs! Climbing almost 600 steps in this heat was a bit of a challenge but we made it to the top of the highest “butte” in Paris…the beloved Montmartre area. 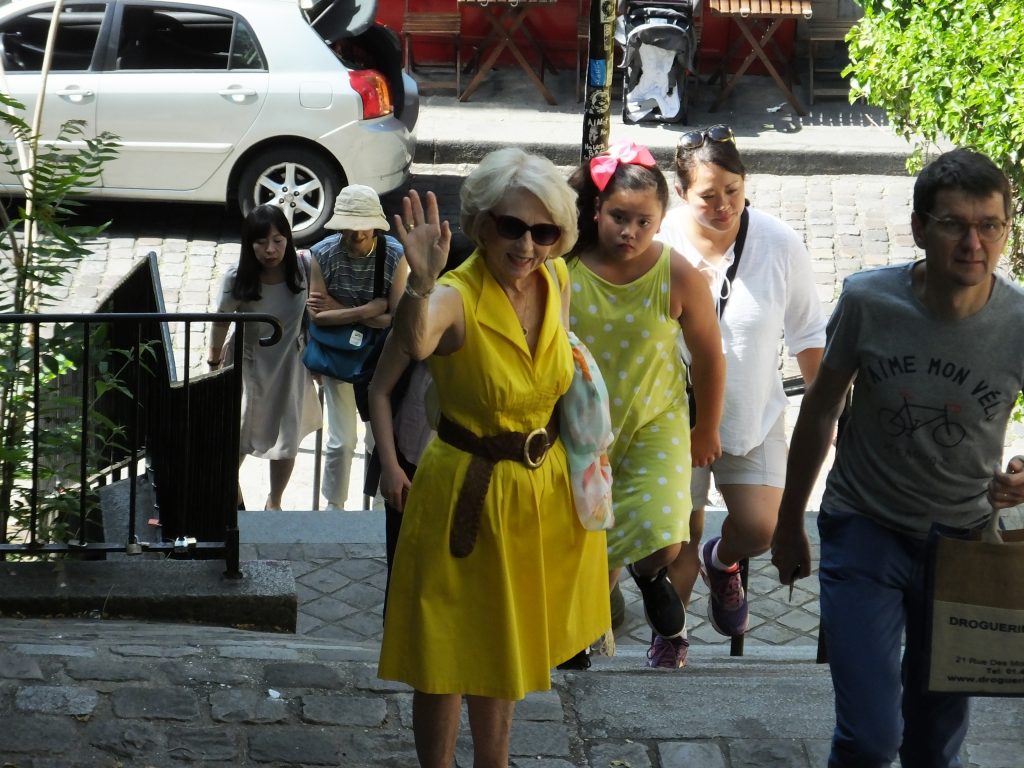 The only disappointment of the day was the hour-long (plus) line in the hot sun to get into the Sacre Coeur, the beautiful white basilica that rises into the sky like a vanilla ice cream cone. Security has changed everything. It used to be that masses of people could approach the wide spray of steps up to the church through multiple entrances, but now there is one secure line where all bags have to be checked. Imagine what that’s like on a beautiful Saturday in June when the city is full of tourists. The grandchildren were disappointed but in agreement that the hot sun was not our friend.

We opted instead to walk around in some of the lesser touristy areas, and I shared with them my absolute favorite view of Paris on the back side. If I could own an apartment, this is where I’d choose.

Then we did something that Bernie and I have never done…visit the Montmartre Museum and Renoir Gardens! It was just magnificent, and I was thrilled to watch my granddaughter, only 10, get so interested in listening to every one of the audio tour selections. We lost Bernie at one point creating a bit of a panic for me only to find him sitting alone in the lower garden area looking at the vineyards and enjoying peace and quiet in such a serene spot. The museum is very affordable and has an expertly done film about the history of the area.  Just fabulous! Montmartre went from a working class mill community to the artistic and Bohemian center of Paris. It gave us the windmills, the cabarets, Le Moulin Rouge, the circus, and early cinema. Artists lived and worked in the area of the museum…Renoir, Utrillo, Suzanne Valadon, Picasso, Toulouse-Lautrec. One point made in the experience was that Montmartre was and still is a very tight-knit community. Visit the Musée de Montmartre if you are ever in Paris.

We ate lunch at our favorite spot, Chez Plumeau, but unfortunately not under the wisteria vines. A table for six outside was not to be had because of the crowd. We had to settle for indoors, but the food was just as good. Bernie caught this little chalkboard sign:

Our jaunt down the mountain was via the street which showcases the very famous restaurant “Le Moulin de la Galette” or The Windmill of the Pancake.

After an eat-in dinner off the street of roasted chicken and potatoes, we took a spin through La Place des Vosges. Enjoy the pics of the area and its art galleries.

And finally, the “Purely Paris” photo of the day has to be the accordion player on the subway ride to Montmartre, fun for the kids who rewarded him with a few coins after his performance.

P.S. Andrew’s goal is to find another Alabama fan in Paris, thus the cap!

Enjoying a First Look at Paris as a Family A Hot, Hot, Hot Day in Paris