Hotter by the Day in Paris

Weather is always a huge consideration in Paris but never as much as when the temps soar like they have this week. The two jackets I brought, all the scarves and my two new pairs of  jean capris will not get much wear right now. The predicted high for today was 100 but the forecast was revised and right now as I’m writing this at 5pm, it’s only 92 degrees. I made a request this morning of the management company to bring a fan over, and when we returned from our afternoon jaunt, it was all set up!  It’s a large rotating one on a stand, and we are most grateful for the quick response.

Bernie is having fun playing with his new tripod and taking some night shots out our windows.  It doesn’t get totally dark here right now until almost 11pm so it’s hard to roam around Paris that late and take the kind of gorgeous shots our friend Charles Gattis took last fall.  As the days get a little shorter, maybe we’ll venture out. 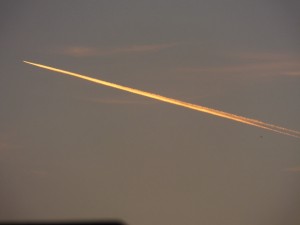 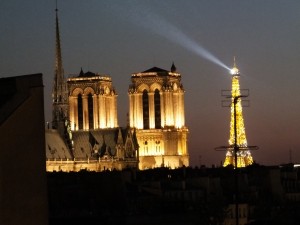 Today’s afternoon outing was to Le Printemps, one of the two gorgeous department stores in Paris.  This is their 150th anniversary and the store was decorated beautifully with pink roses everywhere. 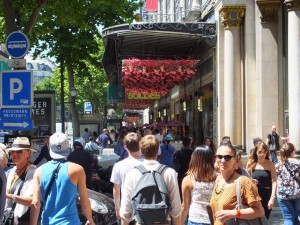 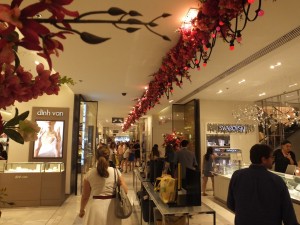 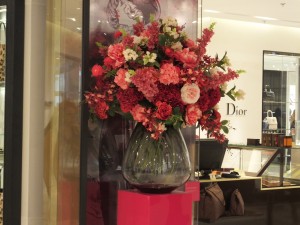 So funny for the two of us to forget that today was the first day of LES SOLDES (the yearly summer sales). It was crazy, like ants on a chocolate cake at a picnic.

On the way, we recharged my Navigo card which will be good for the entire month of July for as many trips as I want to make.  No more keeping up with all the little subway tickets, AND Bernie’s subway pass which has to be seven or eight years old is still working.  Someone forgot to enter an end date perhaps when we bought that two-week pass!  Every year, we think surely it won’t work but it does!

We had two objectives at Le Printemps:  to buy ice trays and to go up to their terrace on the top of the building (something we had never done.) It is lovely, nicer in my opinion than Galleries Lafayette.  We cooled down with an aperitif and took some nice photos. I had a dramatic Marilyn Monroe moment when the wind caught the skirt of my sundress!  Oh my, so embarrassing but funny for Bernie and all the bystanders. No photos of that! 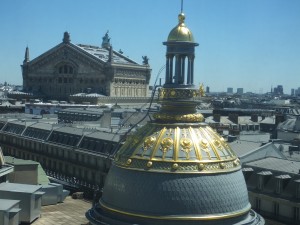 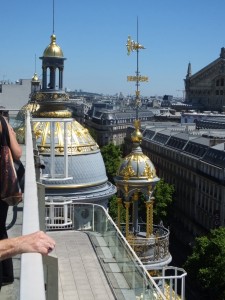 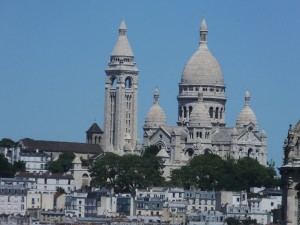 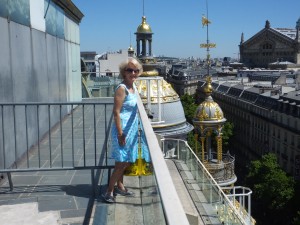 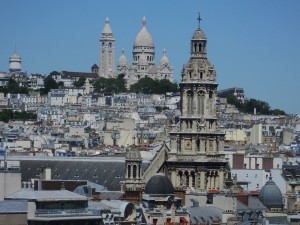 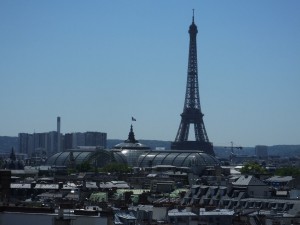 We dearly love hearing from everyone so keep up the comments.  Share my blog sign-up with friends and family and help me grow my numbers.  If I have a prayer of getting a publisher for the Paris book, this will certainly help.