Yesterday was another catch-up day full of shopping and dealing with an unfortunate issue relative to our apartment! It is frustrating and exasperating. We feel we may be part of a scam.  Many thanks to my realtor daughter for her assistance. Again, I caution about using VRBO.

Bernie, being the dear that he is, helped me color my hair and it’s okay…a little dark but the white will reappear in no time, so no worries. 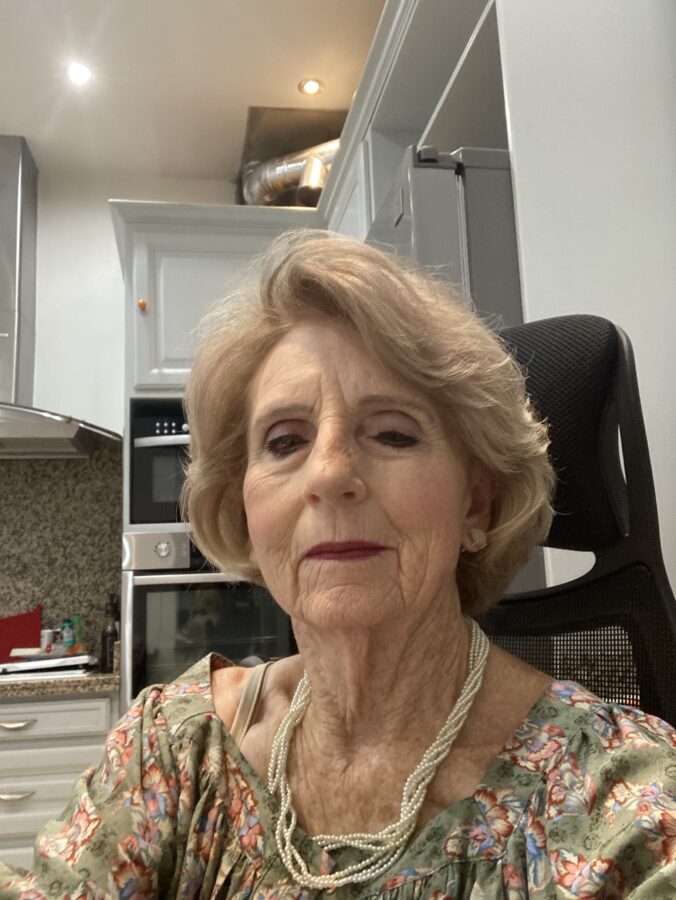 We went over to the St. Michel area on Line 4 to a large Parapharmacie which in Paris is a mega drugstore noted to have a wide selection of cosmetic brands at great prices. They even carry brands like Clarins. We were successful in finding everything on our list except for one Clarins product…50+ sunscreen for the face. Their supply had been depleted and with summer’s end, they hadn’t reordered. I knew of an independent Clarins store back over near rue Franc Bourgeois, and they had just what I needed. Ladies, it’s the best.

Not many photos today except for this one caught last evening at a corner café…a cute French bulldog.

As fate would have it, our streak of bad luck continues. Bernie just received notification from our airline, Le  Compagnie, that our flight home has been cancelled! Our option is to leave a day early or stay one additional day. We’ll opt for the former which means we will probably have to spend the night in Newark in order to make our Delta flights work back to Huntsville.  Ain’t travelin’ fun?

Amid all of this craziness, you can see why your comments help keep our spirits boosted. You have provided so much good information and asked some great questions. Some of those have been relative to what the drought and other climate change issues are having on France. I’ve pasted in an article from France24, the 24-hour news channel on the winegrowers. I tried to just copy the link but couldn’t figure that out so here’s the entire article. It’s very informative. If you’re not interested, just skip it!

Have a great day!

Winegrowers have had to start their harvests early in several French regions because of the summer’s searing heatwaves. In the southwestern Languedoc-Roussillon, they kicked off the harvest period at the end of July. In Haute-Corse, the northern part of Corsica, they began harvesting at the beginning of August. Both regions carried out their harvests one to three weeks earlier than usual.

“The 2022 vintage is complicated for the French wine industry,” said Laurent Audeguin from the French Wine and Vine Institute. “The heat causes the grapes to burn and ripen too early in most regions; the necessary aromas don’t have time to develop.”

“The rise in temperature also lowers the acidity of the wine and increases the alcohol content,” Audeguin continued. “So the whole balance is disturbed.”

The drought exacerbates the problems caused by heatwaves. Normally vines can draw water from quite far down in the ground with their deep roots. But this year, water tables have completely dried up, especially in the south of France. Without water, a vine loses its leaves and the grapes stop growing.

“The quality is affected but so is the quantity of wine we can produce,” Audeguin said. “In the parts of France where they haven’t started the harvest, we’re waiting for a few drops of rain to change the situation.”

But the climate crisis means harvests like this are becoming the norm.

“Climate change has systematically affected wine production since 2010,” said Nathalie Ollat, an expert on winegrowing at French agricultural research institute INRAE. “This time we had hail, heatwaves and drought. It really brings home the consequences of global warming.”

Last year was already catastrophic. France’s wine industry had to endure a spring heatwave followed by frost in 2021, which destroyed a significant number of vines. Heavy rainfall then caused diseases such as mildew that eat away at the plants. Likewise, 2020 saw unusually early harvests because of a historically warm spring. “These phenomena are bound to repeat themselves,” said Ollat.

“I don’t know a single winegrower who doesn’t believe in climate change,” Audeguin said. “They have to live with global warming on a daily basis.”

On average, the French grape harvest happens three weeks earlier than 30 years ago. And there is a lot to be lost economically as well as culturally: wine and spirits exports contributed €15.5 billion to the French economy in 2021.

So the wine industry is trying to adapt. In August 2021, it set up a national strategy to safeguard the vineyards.

“We’ve got to draw on the huge variety of grape varieties,” Ollat said. “France has about 400 grape varieties but it uses barely a third of them. The overwhelming majority have been forgotten – having been deemed insufficiently profitable at one point or another.”

Some of these forgotten grape varieties could be well adapted to the new weather conditions. “Some, especially those from mountain environments, mature later and seem particularly tolerant of drought,” Ollat continued. “They could prove particularly interesting.”

In the Alpine French region of Isère, winegrower Nicolas Gonnin is a specialist in these forgotten grape varieties. When he took over the small family business in 2005, he decided to uproot the Pinot Noir and Chardonnay plants installed by his grandparents in the 1970s and planted only local varieties with names barely known to the general public – such as Jacquère, Mondeuse Noire and Viognier.

>> ‘Humanity is bullying nature – and we will pay the price,’ WWF chief tells FRANCE 24

The advantage is twofold, Gonnin said: “It allows us to reconnect with our local heritage and produce wines with a real identity. At the same time, we have to rely on the diversity of grape varieties on offer to fight against climate change. In the past, people understood that well and would grow a multitude of grape varieties, all with different characteristics. This approach will allow us to keep production going in the face of frost, drought and heatwaves.”

Outside of his day job, Gonnin also works at a centre for the study of vines trying to get those ancient Alpine grape varieties back into use. So far, it has been able to get 17 into France’s national catalogue, a necessary step for being able to cultivate them again.

“The other solution would be to look for grape varieties abroad, especially in other Mediterranean countries,” Ollat said. “An experimental vineyard was set up in Bordeaux in 2009 to evaluate 52 potential new varieties from France and abroad – Spain and Portugal in particular. It’s very promising.”

A third option is hybrid grape varieties, genetically modified in the laboratory to better resist drought or frost. “But this option hasn’t been studied much at this stage,” Ollat said, notably because of the cost.

Winegrowers have engaged in a variety of other experiments. Some are modifying the density of their plots to require less water, while others are thinking of purifying waste water to boost the irrigation systems. Others are attempting to shade the vines by planting trees. “There’s even the example of one vineyard which installed solar panels over the vines in such a way as to shade them while producing electricity,” said Nathalie Ollat.

“We’re already seeing such relocation initiatives on a small scale; they’ve been doing it in Brittany for example,” he went on. “This could be promising if there’s enough funding. That’s not to say we could be making Bordeaux in Brest [on the western coast of Brittany], but it does mean that new varieties of wine could be created.”

“The nature of the French wine industry is going to be completely different by 2050,” Ollat concluded. “And the precise nature of that change will be determined in part by the results of the experiments going on throughout the country. We could have irrigated vineyards in the south, others that have disappeared, as well as long-forgotten grape varieties brought back. Perhaps Burgundy wines will go from using one variety of grape to several varieties. And maybe we’ll have entirely new vineyards in entirely new places on top of that.”

This article was adapted from the original in French.

Strolling Discoveries in Paris A Day with Friends in Paris