A Grand Finale to our Week…Dinner at Le Train Bleu

Inevitabley, we are tourists, mais oui? And we still enjoy what some locals might find rather gauche. Our attitude is to embrace what is fun and enjoyable regardless of how it might rate on the Parisian sophistication scale. Dinner at Le Train Bleu is an example and was our way to create a memorable final night for our visitors, Brooke and Kayla.

They attended a cooking school class from 9am until 4pm yesterday which worked out really well since it rained hard during that entire time. We met them in our neighborhood at 7:30 for our grand finale. They have mastered the Mètro perfectly and were right on time. The sun came out and the skies cleared as if to give them a few glorious hours before saying goodbye.

I have copied some great information here from Le Train Bleu website:
“A LEGENDARY PLACE IN PARIS : FROM 1900 TO THE PRESENT

Paris was about to receive a major new Universal Exhibition in 1900. After the Saint-Lazare train station in 1889, it was the turn of the Gare de Lyon to take the appearance of a palace, and in particular to magnify the new PLM Company (Paris Lyon Marseille) terminal, which operated lines of the Southeast network at the end of the 19th century. The project was entrusted to the architect Marius Toudoire, who built the 64 meters belfry (the Clock-Tower) and the monumental façade of the station.

The Management of the railway company wanted to build a prestigious buffet, symbol of travel, of technical innovation, of comfort and luxury. The project was given to the same architect, who built the buffet in the building at the centre of the station.

The station’s buffet was unveiled in 1901 by the President of the Republic Emile Loubet.

In 1963, Albert Chazal renamed the buffet as « Le Train Bleu » (the Blue Train), honouring the legendary « Paris-Vintimille », legendary train with as its destination the Côte d’Azur.

Gildings, carvings, mouldings, chandeliers and frescoes cover all the walls of the restaurant, giving it the appearance of a museum of the 1900s. Twenty seven French artists, some awarded with the Prix de Rome, have worked on this unparalleled decor.

The 41 paintings mounted on canvas were painted by the most prominent artists of the time: François Flameng, Henri Gervex, Gaston Casimir Saint-Pierre, René Billotte, etc. They illustrate views of the main cities and sceneries viewed from the PLM Company trains during the 20th century: Paris, Lyon, Marseille, Orange, Villefranche, Monaco, Nice, Saint-Honorat, the Mont-Blanc massif, etc.

Along with these bright reminders of the railway sceneries are several portraits, some of the PLM Company’s employees, such as Gustave Noblemaire (General Director), and key figures like Sarah Bernhardt, Réjane or Edmond Rostand.

To preserve this rich heritage, a privileged witness of the Paris of the 1900s, the Train Bleu was classified as Historic Monument in 1972 by Jacques Duhamel.

Hope you enjoy these photos, and we wish Brooke & Kayla a safe journey home with many wonderful memories in their suitcases! 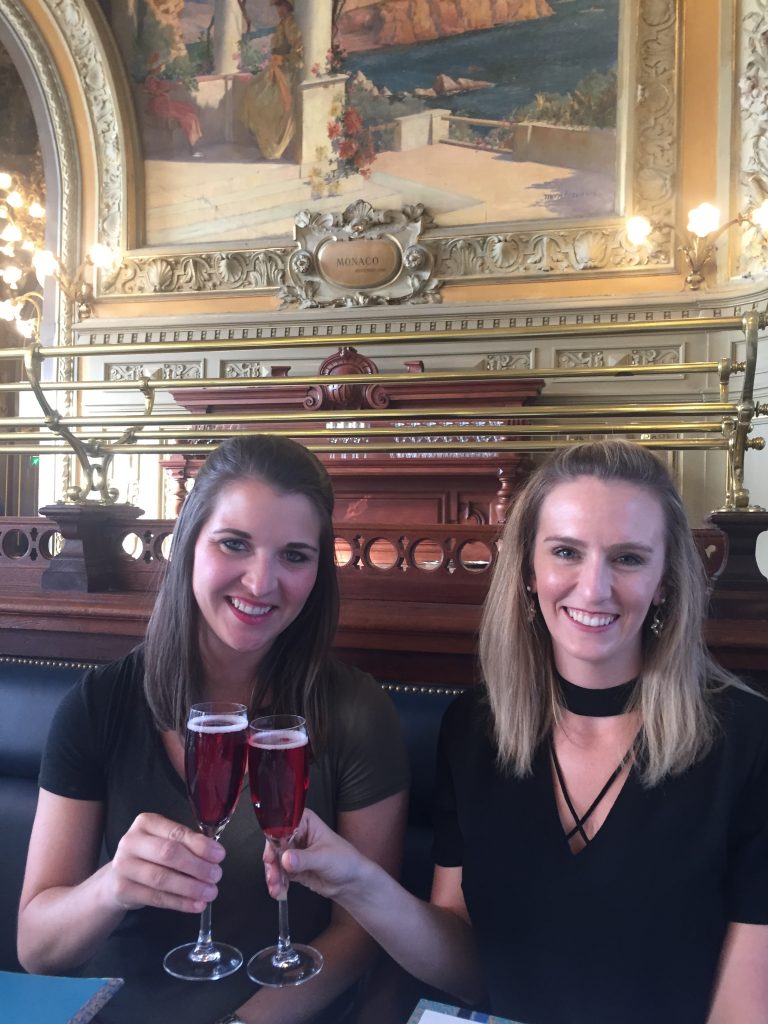 Brooke and Kayla’s introduction to a Kir Royale or red champagne! 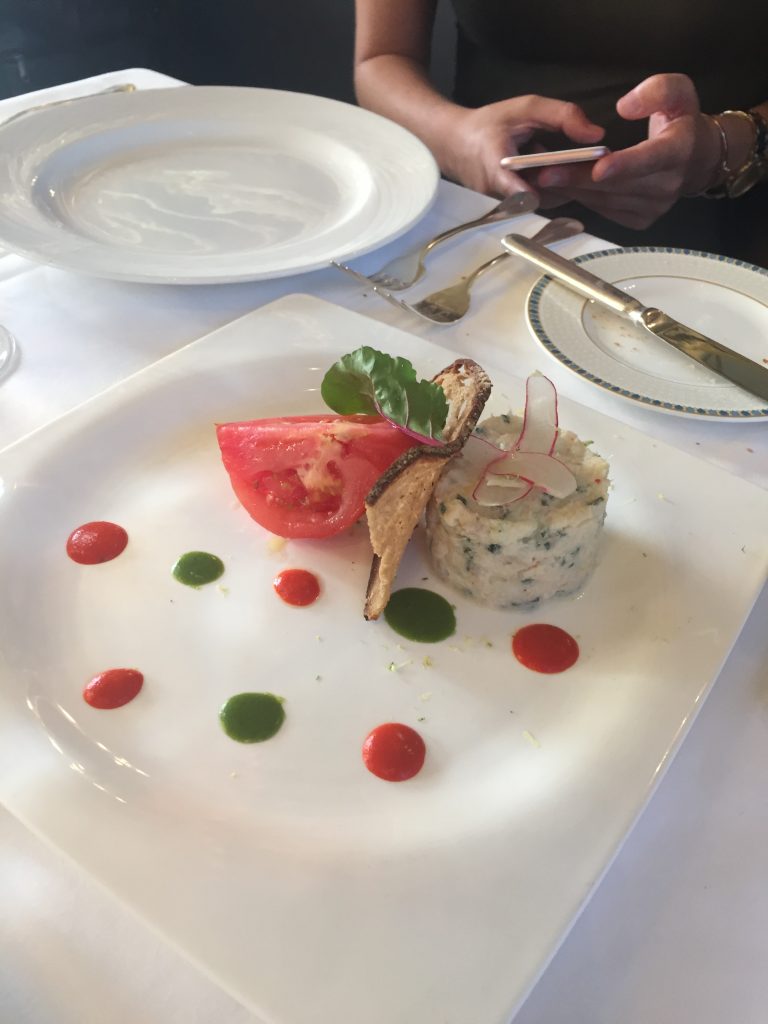 Brooke and Kayla shared a “starter” or entre of cod 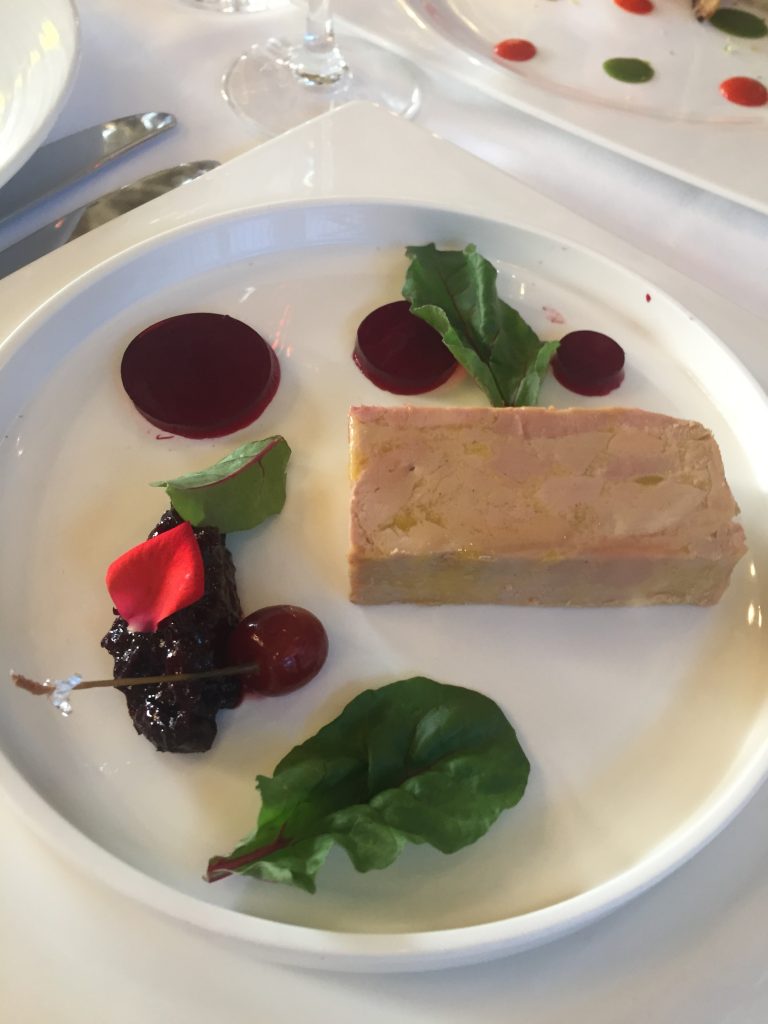 Bernie and I shared the foie gras 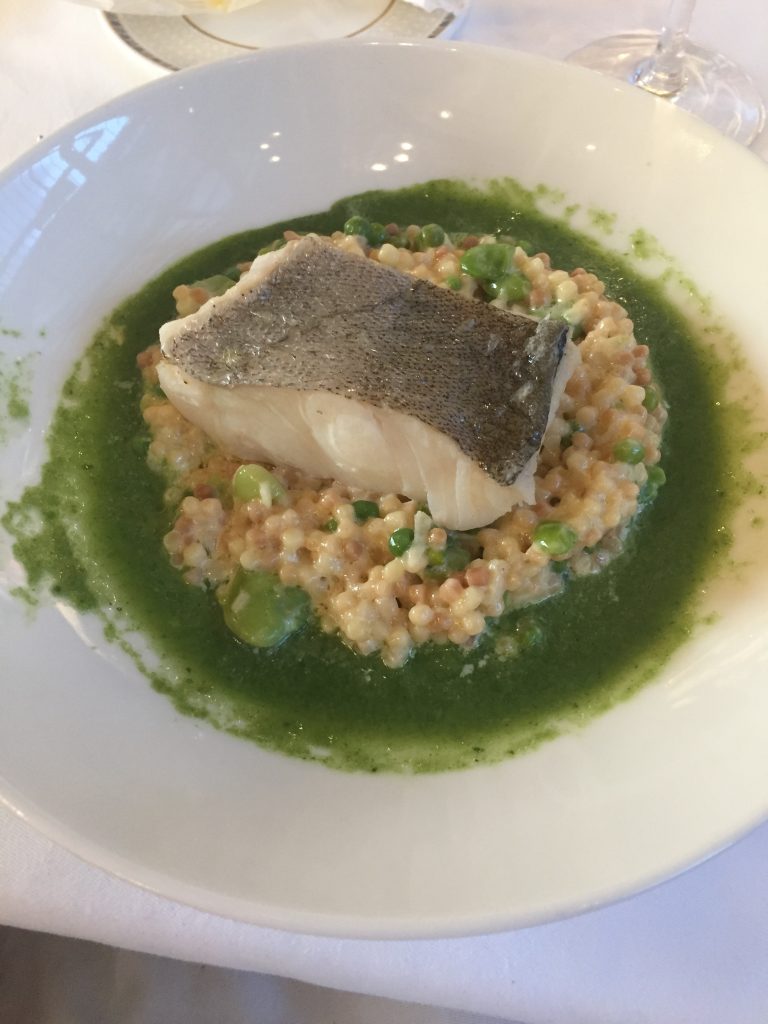 This is Linda’s main course of swordfish which was delicious!

Bernie and Kayla had the lamb sliced at the table with WONDERFUL potatoes, and Brooke had a beef filet prepared in flambé style table side. Here’s a video which I’ve never tried to post so hope it works.IMG_0679 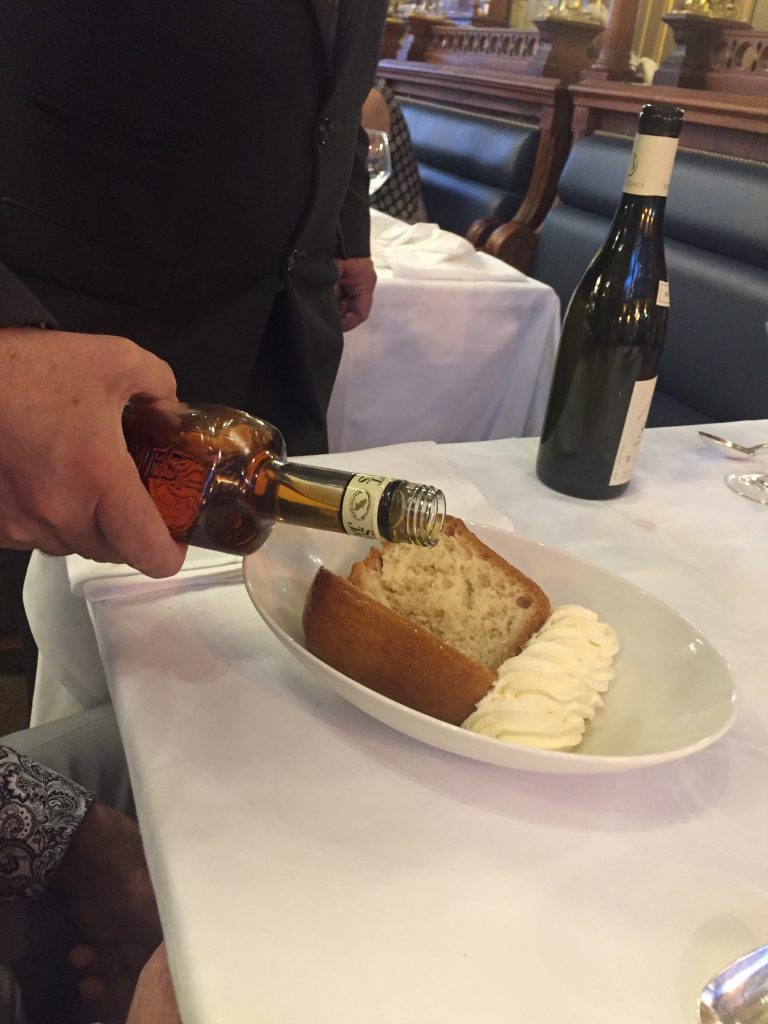 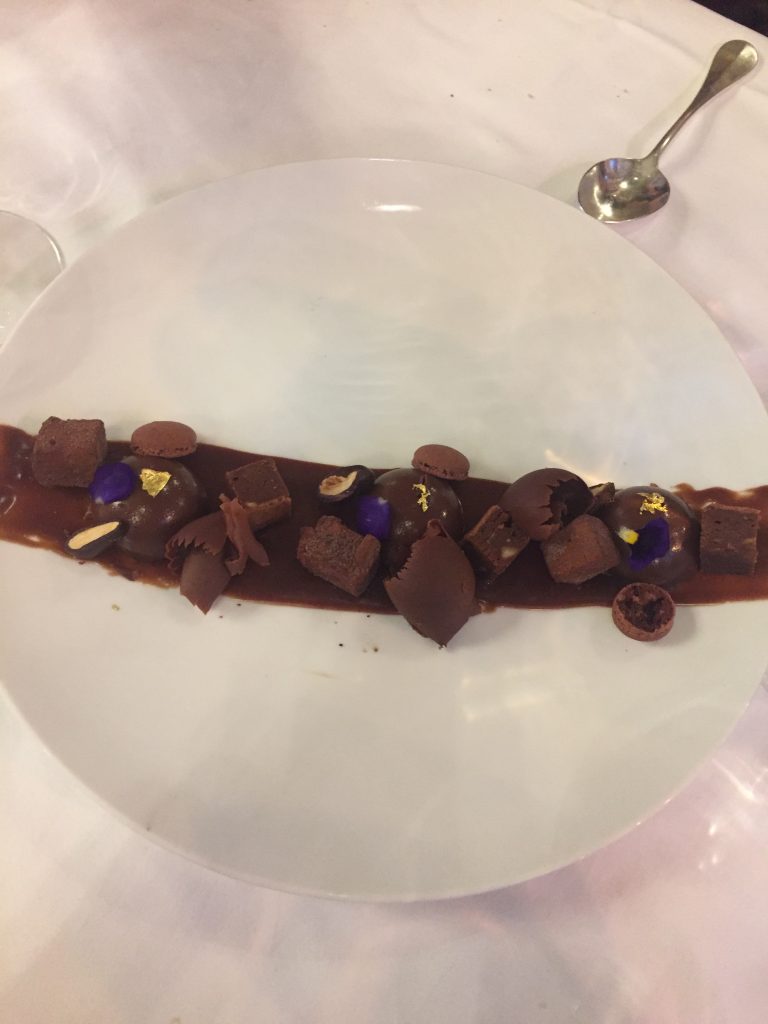 P.S. The “Purely Paris” photo of the day is a typical scene of a man with his dogs sitting at an outside café. 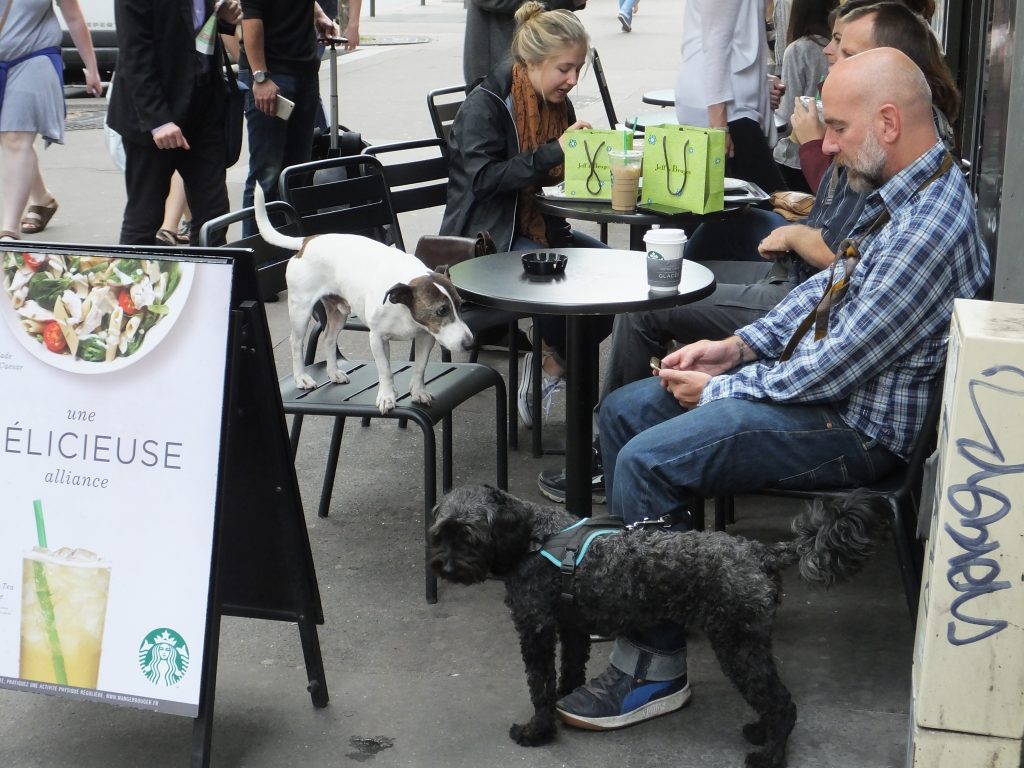 Tweet
« From Angelina’s to Prada…Sampling and Shopping in Paris! » Happy Fourth of July Weekend, America